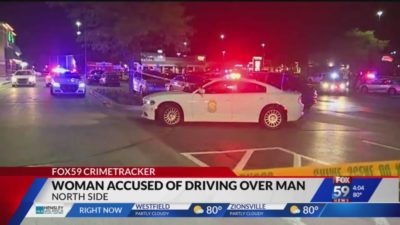 Indy Champions director Danyette Smith said domestic violence calls to IMPD have gone down, but there has been one noticeable increase: males calling about female suspects.

A woman was charged with murder after she allegedly followed a man she said was her boyfriend to a bar using an Apple AirTag, accused him of cheating on her and ran him over with her car.

Gaylyn Morris, 26, followed Andre Smith to Tilly’s Pub, where she told a witness she was going to beat up the other woman. Morris allegedly picked up an empty bottle and threatened to beat up the woman.

Despite the other woman being spared, Morris did intentionally run Smith over and killed him in the parking lot of a north side pub.

AirTags are coin-sized devices that use Bluetooth technology to help users locate lost items, but can also be used to track people.

Apple’s AirTag has been the subject of controversy since its introduction. Various lawmakers have tried to prevent their use as stalking devices.

The family of the victim want to remind others that resources are available to help prevent domestic violence before it turns deadly.

Find more details on this shocking story by checking out the following news outlets listed below.