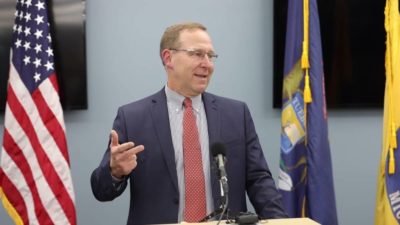 A Grand Rapids police officer was charged with second-degree murder after shooting a Black man in the back of the head during a struggle after a traffic stop. The officer will have a discharge hearing and the final determination on his employment will be made by the city manager.

The family of Patrick Lyoya called the decision to charge Christopher Schurr “a step in the right direction” and said Schurr should be held accountable for killing Lyoya.

Police records show that after the shooting, Schurr told supervisors that Lyoya “has my Taser” and that he had been “involved in a shooting” about four minutes after the initial stop.

Lyoya fled on foot after the stop after refusing to provide his license during a traffic stop. He was wanted for a domestic violence case and a traffic crash. In addition, he was driving on a revoked license because of a third substance abuse conviction in 10 years.

Both men struggled on the ground after the officer caught up to Lyoya.

Lyoya, 26, was shot by Schurr after he tried to arrest him for having an unregistered license plate. The shooting led to protests and the state’s civil rights agency renewed its request for a pattern-and-practice investigation into the Grand Rapids Police Department.

The Prosecuting Attorney said he received the final investigative report from the state police about eight days ago. The hold up was due to a forensic report from the company that made the Taser used in the encounter.

The Kent County Prosecutor said he will announce whether charges will be filed against Grand Rapids Police Officer Christopher Schurr in the death of Patrick Lyoya.

Grand Rapids mayor Rosalynn Bliss said the city is committed to “long term systemic changes” to create a safer and better community for everyone. The police chief said he was comfortable with the decision to seek the officer’s termination.