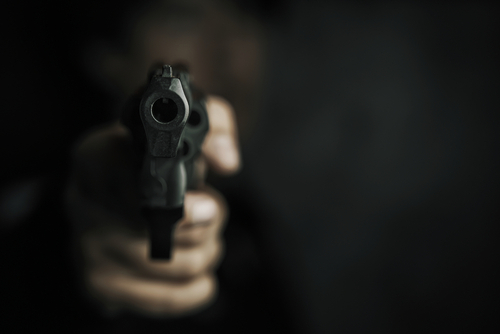 In a north Georgia convenience store on Monday evening, a robber pointed a .45 at the head of the clerk and ran into some serious trouble after three customers grabbed their own firearms and rescued the clerk.

It was reported by Ellijay Police Department that Shawn Sutton and Melody Sutton, both 39, arrived at the Ideal Mart on Old Northcutt Road just before 6:30 p.m. Shawn Sutton entered the store pretending to be a customer while Melody Sutton waited in their car.

In police reports, Shawn Sutton made out that he purchased an energy drink as he pulled a pair of women’s panties around his neck, covering his face – and as he walked behind the counter, he pointed a .45 at the clerk’s head and demanded payment.

Unfortunately for Sutton, he hit the good-guy-with-a-gun jackpot on this particular night.

Would you believe there were three legitimate customers at the store at the time – two inside the building and one pumping gas – and they all had guns, too, and were willing to pull them in order to restore order?

During the robbery, one customer who was legally carrying a concealed handgun “intervened,” while a second customer ran to his car, grabbed his gun, and reentered the store to assist the first customer in subduing the suspect.

A third customer at the gas pumps also came inside the store with his gun “to assist,” as the suspect tried to leave the store, police said.

According to police, the first customer then instructed the other two customers not to fire since the suspect had been disarmed.

One of the officers who arrived told the suspect – who was still trying to leave – to get on the ground. Nevertheless, when the suspect failed to follow the officer’s instructions, the officer used a Taser on him, which resulted in the suspect being taken into custody, according to the police.

The suspect’s wife, Melody Sutton, who was in their car, was also taken into custody without incident, according to police.

According to police, Shawn Sutton faces charges of armed robbery, aggravated assault, and possession of a firearm by a convicted felon.

Melody Sutton has been charged with armed robbery and intimidation, according to WSB-TV.

Police reported that both Suttons were being held without bond at the Gilmer County Adult Detention Center.

According to the station, all the customers had legal permits to possess firearms.