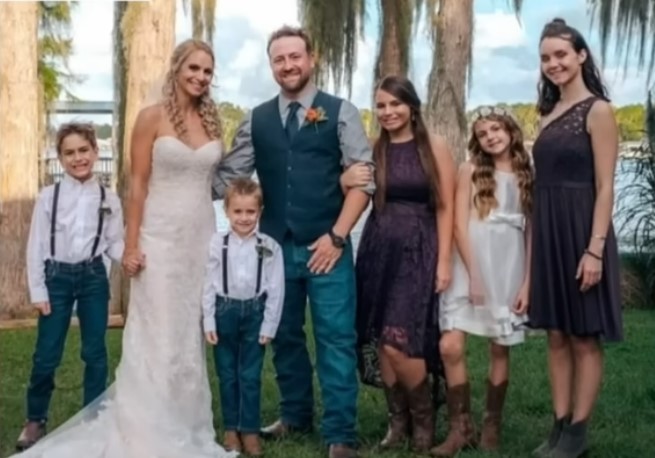 In a horrific fire pit accident in her family’s backyard, a Florida mother of five died after suffering burns over nearly 100 percent of her body. Her 11-year-old son was also hospitalized.

During a gathering with friends in Tarpon Springs, Nicole Foltz, 38, and her husband, Jeff, started a fire to prevent bugs from getting into their house, according to WFTS.

Nicole tried to reignite the fire after Jeff stepped inside, and it fizzled.

“I had just gone inside and to my knowledge, she decided to try to keep the fire going, keep the fun going, and she put another log on it and there wasn’t much flame at all,” he said.

“But she just, I guess, felt to pour a little gas on it, and it would reignite, and it did. I guess it must’ve travelled the gas stream up to the gas can, and it exploded in her hands,” Jeff suggested.

He told WFTS that his wife, who was in a state of panic, “actually stopped, dropped and rolled like you are supposed to.”

Even though she attempted to fight the flames, she was overwhelmed by them and suffered burns to almost 100 percent of her body. Three days following the accident on November 14, she passed away.

According to the outlet, Jeffrey, their 11-year-old son, suffered second- and third-degree burns over about 40 percent of his body and spent 12 days in the hospital.

“I never left his side in the hospital, which is difficult, especially because I feel bad for other children there. I can see how it is to not have somebody that can be there for you by your bedside 24/7,” Mr. Foltz stated.

He has recently returned home to recover from the severe injuries he sustained in the accident.

“He’s staying pretty strong. I’m sure the whole crew there was really surprised to hear that two days after we got home, he was walking,” said his father.

According to a GoFundMe page for the family, the tragic mother worked as a server and manager at the Tarpon Tavern for many years.

“Her radiant smile always filled the room. She was always there for everyone — there for every relative, every friend, every customer, every co-worker, every birthday, every anniversary, every day for every one,” said Dan Jenkin, who organized the fundraiser.

“We will miss Nicole, but our memories of her are eternal,” he reported.

The owner of the Tavern, Ania Bozena, also remembered her beloved employee.

“She absolutely loved her work where everybody adored her not just for her hard work, but also personality and friendship,” she said.

“She was a devoted wife to her amazing husband, Jeff. But most of all, she was a great mother who always put her family first,” explained Bozena.

The Bistro and Tarpon Tavern donated 10% of their proceeds to the devastated family on Friday night.

According to Foltz, Nicole is “all around one of the best, genuine people. She had a fierceness to her. Everybody loved her.”

It is important for people to be aware of and practice fire safety.

“I don’t want to read about somebody else’s family having to go through this. It’s unimaginable,” he said. “It’s just one of those senseless acts you don’t expect to happen in your family … gasoline is not a joke when it comes to fire. You have to be careful or just don’t do it at all.”

According to him, the family is going to use the fire pit as a bird bath in the backyard, which Nicole always wanted.