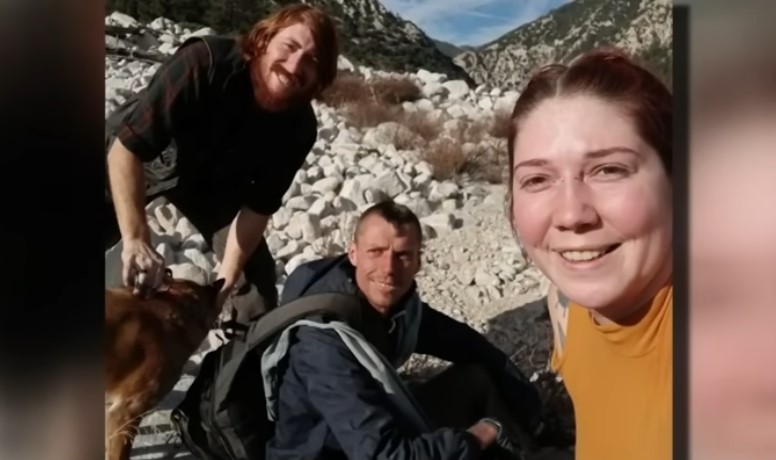 Thanks to some campers, a man lost in the San Bernardino National Forest for two weeks has been found alive.

“So we went up to go camping,” Allison Scott explained. “We both had some time off work and it was the day after Thanksgiving.”

Allison Scott and her boyfriend Freddie Valdivia will never forget that day.
After finding a remote camping area in the San Bernardino National Forest near Angelus Oaks, the couple heard something.

“A plane flew by pretty low and we heard somebody yelling help, and so I called out ‘hello.’ And he heard us and he kept yelling,” she recounted.

Due to the rugged terrain, Scott says it took about 30 minutes to hike to the man’s location.
He was eventually found in a creek bed. The man said his name was Eric.

He can be heard saying in a video the couple took: “Sorry to put a damper on your guy’s camping trip.”

What a story he had to tell.

“He was pretty out of it. He was obviously starving, he wasn’t super dehydrated because he was drinking creek water. But he told us he had taken a cab up and was hiking up to Big Bear from Angelus Oaks and he had gotten lost and he had been trying to find somebody to help him for days. He couldn’t walk anymore because his feet were so swollen and infected,” Scott explained.

They called 9-1-1, and within 15 minutes the San Bernardino County Sheriff’s Department’s helicopter crew found them.

In the moments prior to being hoisted to safety, Scott says Eric told them he had been lost for about two weeks and miraculously survived freezing temperatures after losing his lighter.

In the end, Eric was rescued and taken to a hospital by Scott and her boyfriend.

“He told us it was a Thanksgiving miracle and he offered us money, and we said no we don’t want to take your money,” she explained.

Instead, Scott says they got something priceless: the satisfaction of helping someone in need, and an incredible story of survival they can share with others.

“I never thought that I would be that person to find a missing person so this very incredible. I’m just happy he seemed OK,” she replied.

According to Scott, Eric lives in Oceanside in San Diego County. Once he recovers, she and Valdivia hope to reconnect with him.