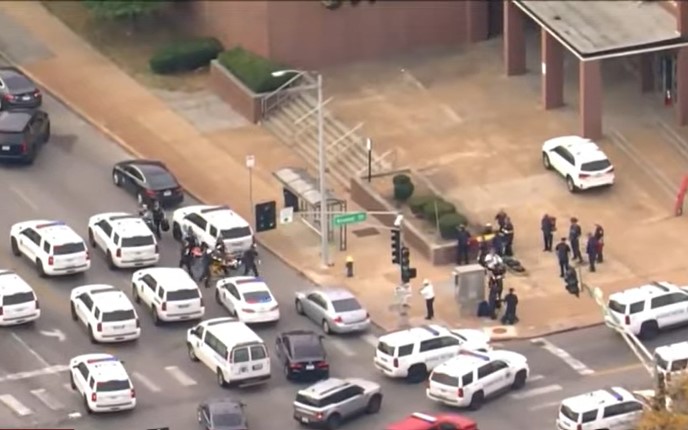 At least three people were killed in a shooting at a school in St. Louis, Missouri, early Monday morning – including the suspect, who shouted, “You’re all going to f—king die!” while opening fire on campus, authorities said.

The male suspect, whose identity was not disclosed but is believed to have been in his 20s, has died after exchanging gunfire with authorities inside Central Visual & Performing Arts High School, part of the St. Louis Public Schools, officials reported at a news conference on Monday afternoon.

Police reported that a teenage girl was pronounced dead on the scene and that an adult woman died at the hospital. Officials report that seven other people were being treated for gunshot wounds and shrapnel wounds at a local hospital.

As of yet, the identities of the victims have not been released, and police are investigating whether there was a relationship between the gunman and the victims.

“It is a heartbreaking day for all of us. It’s gonna be tough.” The St. Louis Police Commissioner Mike Sack told reporters that, despite the fact that on paper there are only nine victims, eight of whom have been transported, and one of whom remains, there are hundreds more” Sack said.

“Everyone who survived this is going to take on trauma. Even the officers who responded here and the firefighters, the paramedics who worked on people here, are going to experience some degree of trauma,” Sack said.

“It’s terrible to think about. Here is the same place where kids go to learn, to grow, to develop, and something like this happens. It’s just heartbreaking.”

It appears the suspect broke through the school’s locked doors at 9:10 a.m. with a long gun. It is believed that he began shooting in a classroom on the third floor. Sack acknowledged that the gunman’s struggle with the locked doors “bought us some extra time.”

Upon receiving the alert, security officials were able to quickly contact the police, who responded within minutes. There was no hesitation on the part of the officers as they entered the school and engaged the suspect with gunfire.

A quick response by the St. Louis police stands in stark contrast to the 77-minute delay police officers experienced in May during the Uvalde, Texas elementary school shooting that claimed 19 lives.

The St. Louis Post Dispatch reported that math teacher David Williams heard the principal over the loudspeaker saying the code word to indicate that there was a shooter inside.

Williams heard gunfire outside of his classroom, where one of the windows on the door had been shot out. In an interview with CNN, he stated that he heard a man state, “You are all going to f–king die.”.

Ninth-grader Nylah Jones told the newspaper that she was in math class when the gunman opened fire from the hallway. She stated that students gathered in one corner of the classroom and attempted not to move as the gunman banged on the door.

She said that when the children were put on lockdown, they didn’t believe it was due to real shooting.

Senior Taniya Lumpkin was in speech and debate class when a staffer told them to lock the door, but they “didn’t know if it was real or not.”

“The next thing you know, we just heard gunshots,” Nylah said as she pointed out what had happened. In the beginning, just one shot was fired, then multiple shots were fired, and then a single shot was fired again.

Teacher Michael De Filippo told the paper: “Once you heard the boom, all the chuckling and laughing in the back of the room stopped.”

In an interview with the Post Dispatch, 16-year-old Taniya Gholston said the assailant’s gun eventually jammed and that she heard him say something about how he was “tired of this damn school.”

A 16-year-old girl, Jahmiah Hampton, was in vocal class on the fourth floor when she heard gunshots go off on the third floor as she was in class.

“I heard one big one, and then there were so many I stopped counting,” she told the paper. “I’m confused — why are people so cruel?”

Dakota Willard, 14, who attends the Collegiate School of Medicine and Bioscience in the same building, says he saw a girl lying on the floor.

“What I saw was traumatizing,” Willard said, adding, “But I am fine.” I don’t need any special help.”

To reunite with their children, parents were notified to attend Gateway STEM at 5191 McRee Ave.

Later, a boy was seen consoling his mother.