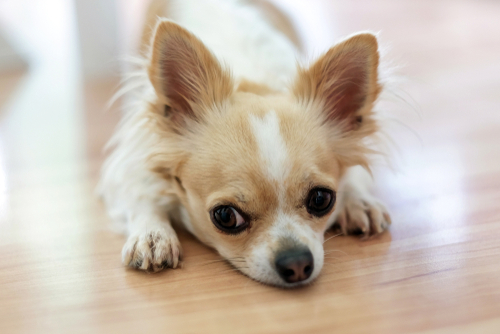 Woman Hospitalized After Dog Defecated in Her Mouth: ‘It Was Disgusting’ – Newsweek

The woman was hospitalized after her daughter’s pet dog pooped on her face while she slept. Amanda Gommo, 51, took a nap with her daughter’s chihuahua, Belle, when the dog fell ill and developed severe diarrhea.

Amanda had fallen asleep with her mouth open when the pup’s messy accident occurred, and some of it ended up in her mouth. The woman awoke and ran to the toilet to throw up, but after 48 hours of stomach cramps, she was diagnosed with a gastrointestinal infection caused by the dog’s feces.

“I was taking my afternoon nap with Belle when I felt something squirt into my mouth. I rushed to the bathroom, where my son was taking a shower, so I was able to grab a quick pic before I washed it out,” Amanda said.

“I was hurling violently for hours afterward – I just couldn’t get the taste out of my mouth.” Amanda’s daughter took Belle to the vet where the dog was diagnosed with a nasty stomach bug.

A few hours later, Amanda started to experience similar symptoms to Belle, so she called 111, who sent an ambulance to her house. She was prescribed painkillers for her stomach cramps and instructed to drink plenty of water to flush out any infection.

After their visit, Amanda’s symptoms became worse, and 48 hours later, she had cramps all over her body. When Amanda’s mother dialed 999, another ambulance was dispatched, and she was taken to Bristol Royal Infirmary where she was immediately hooked up to a drip.

Amanda had contracted a gastrointestinal infection from Belle’s faeces, which had been passed into her mouth days earlier. As she was rehydrated with the electrolytes and glucose she lost during the horrific ordeal, she was placed under observation for three days.

According to Amanda, who also suffers from Crohn’s disease, “I couldn’t eat anything from the moment I got ill to when I was given the drip. I started feeling cramps everywhere, even in my legs.”

“They sent an ambulance the second time, and I was so dehydrated that my kidneys had shriveled to half their size. I spent three days in the hospital while the infection was flushed out.

“My discharge note states that my gastrointestinal infection was caused by a dog defecating in my mouth – something doctors had never seen before. Since it happened, I’ve been drinking two Lucozades every day, lots of tea, and lots of water, and I’m happy to say both me and Belle are recovering.”

“While I still love Belle and forgive her for her little accident, I will be more cautious about what position we sleep in in the future!”