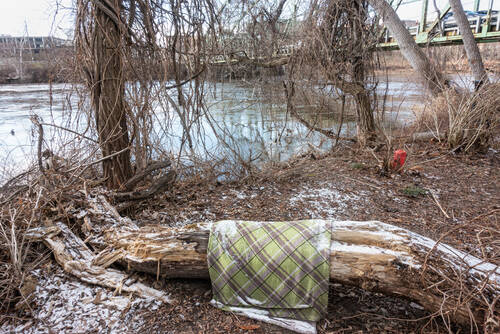 The newborn baby was abandoned in freezing temperatures in the woods on Monday morning.

According to authorities, Alexandra Eckersley, the adopted daughter of MLB Hall of Fame pitcher Dennis Eckersley, is facing multiple charges after her infant was found naked and freezing in 18-degree weather in New Hampshire.

Manchester Police responded to a report of a woman giving birth in a tent just before 1 a.m., according to Boston 25 News. Alexandra, 26, is alleged to have lied to authorities about where the baby was and that she had given birth prematurely.

Initially, Eckersley told first responders that she gave birth to a premature baby boy on a soccer field. The police report that the search crews searched in the wrong area for an hour before she informed them where the tent and baby were located.

The Manchester Fire Department reported that police discovered the child inside a tent near Electric Street, near the Piscataquog River, uncovered and struggling to breathe. The infant was taken to Catholic Medical Center by the police. As of now, there is no information regarding the health of the baby.

According to Carl Olsen, a prosecutor, “This is an incredibly fortunate circumstance that the child was found when it was, and it didn’t delay further.”

Eckersley, 26, pleaded not guilty during a phone hearing on Tuesday to charges of assault in the second degree, endangering the welfare of a child, falsifying physical evidence, and reckless conduct.

According to the outlet, Eckersley was homeless and living in a tent. Olson claims that her family offered her assistance and a place to stay if she sought treatment, but she chose not to do so. Eckersley’s mother believes that she will be safest in incarceration, according to officials.

The bail amount for her arrest was reported to be $3,000 by WMUR. Eckersley was ordered by the court that she cannot have direct or indirect contact with her newborn son, and that she must live in an approved sober living facility, with her parents, or in another residence approved by the court.

Eckersley played for the Indians, Red Sox, Cubs, Athletics, and Cardinals between 1975 and 1998. In 1992, he won both the AL MVP and the AL Cy Young Awards, in addition to six All-Star selections. He won the ALCS MVP award in 1988 and the World Series with the Athletics in 1989. In 2004, he was inducted into the Baseball Hall of Fame.