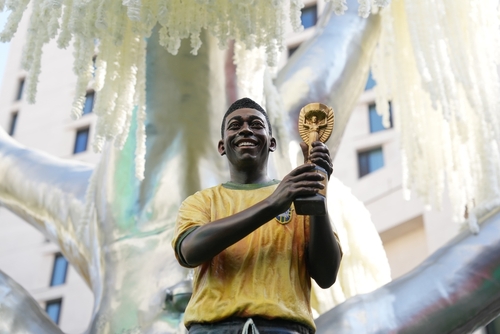 Brazilian soccer legend Pelé, who won three World Cups and became the sport’s first global icon, has died at the age of 82.

“Everything that we are, is thanks to you,” wrote his daughter Kely Nascimento on Instagram. “We love you infinitely. Rest in peace.”

Pelé was admitted to a hospital in São Paulo in late November for a respiratory infection and complications associated with colon cancer. He was reported to have deteriorated in health as his cancer progressed last week, according to the hospital.

Pelé has been synonymous with soccer for more than 60 years. His legacy extends far beyond his championship trophies and remarkable goal-scoring record, having played in four World Cups and winning three of them.

The Brazilian soccer player Pelé was born Edson Arantes do Nascimento in 1940 in Três Coraçes, an inland city about 155 miles north of Rio de Janeiro. In the course of his childhood his family moved to Bauru, a city in the state of So Paulo.

His first experience with soccer was playing barefoot with socks and rags rolled up into a ball – a humble beginning that would eventually lead to a long and successful career.

However, when he first started playing the game, he had modest ambitions.

“My dad was a good football player, he scored a lot of goals,” he told reporters in 2015. “His name was Dondinho; I wanted to be like him.

“He was famous in Brazil, in Minas Gerais. He was my role model. I always wanted to be like him, but what happened, to this day, only God can explain.”

In his teens, Pelé began training with Santos and scored his first goal for the club before he turned 16. Over the course of his career, he scored 619 goals in 638 appearances for the club, but it is his achievements in the iconic yellow jersey of Brazil that are most memorable.

Pelé’s dazzling ability was first observed in 1958, when he made his World Cup debut at the age of 17. Against Wales in the quarterfinals, he scored Brazil’s only goal, then scored a hat-trick against France in the semifinals, and two against Sweden in the final.