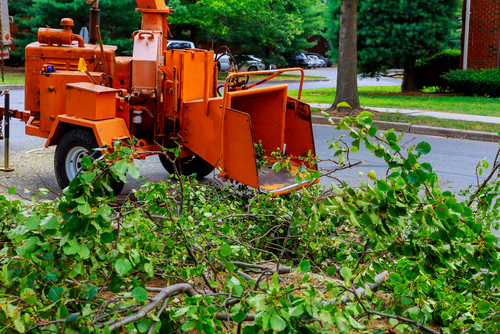 A tree trimmer died on Tuesday afternoon after falling into a chipper in Menlo Park.

There was a workplace death reported at 12:53 p.m. The death occurred in the 900 block of Peggy Lane where officers arrived to find the worker deceased.

Tree trimming activity is common across the city, according to the residents of the neighborhood. The streets along Peggy Lane, for instance, are lined with towering trees.

In their report, Cal/OSHA wrote, “Based on an outside source, the employee was pulled into the chipper during tree trimming operations.”

Lisa Mitchell, a longtime resident, said, “We all feel sick and sad.”. “We’re really sad. We’re trying to imagine what the poor family and their fellow workers are feeling. And it’s just, it’s a lot. We just feel terrible.”

Workers on site Tuesday afternoon said that the company wouldn’t be issuing a statement about the incident.

According to resident Mitchell, the company is quite well known in the community.

She said, “We see a lot of their trucks. So, I can only imagine how they feel, because I’m sure they treat their employees like family, and this is just awful.”

It was around 12:53 in the afternoon when police arrived to discover the man dead from injuries he sustained.

The neighborhood was previously alerted about tree-trimming operations in the area, according to Thanh Skinner. Nonetheless, they never thought it would end in tragedy.

The area is generally very peaceful, quiet, and there is not much activity,” Skinner said. “So, when I got home around 2:30 p.m., the street was completely closed off. We wondered if something happened to one of our neighbors.”

The California Department of Health and Safety will investigate the death and have six months to issue citations if violations are found.

In the meantime, residents along Peggy Lane said they know how dangerous this job could be. A tragic event like Tuesday’s is just one example.

“You hear about horrific things happening, but you don’t really realize that they can happen,” Mitchell said. Today was clear evidence that they can.”

California Division of Occupational Safety and Health is investigating the worker’s death, and the coroner’s office in San Mateo County will release his identity.