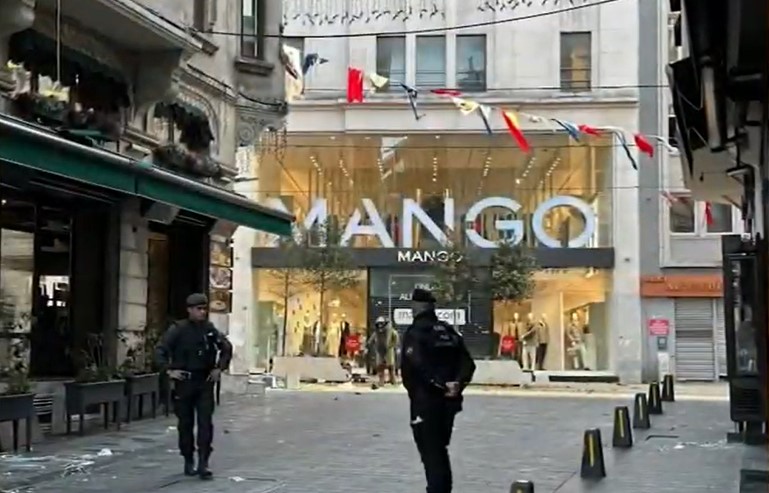 Six people were killed and 81 injured in an explosion in Istanbul on Sunday, leading Turkish Vice President Fuat Oktay to call it a terrorist attack.

“We consider it to be a terrorist act as a result of an attacker, whom we consider to be a woman, detonating the bomb,” he told reporters on Sunday.

The blast took place in the heart of Turkey’s largest city on Istiklal Street in Beyoglu Square, according to Istanbul Governor Ali Yerlikaya.

“We wish God’s mercy on those who lost their lives and a speedy recovery to the injured,” Yerlikaya tweeted.

In addition to Yusuf Meydan, who worked for the Turkish Ministry of Family and Social Services, his daughter Ecrin was also killed.

According to Tariq Keblaoui, a witness on Istiklal Street, the blast occurred about 10 meters (32.8 feet) away from him.

“People were scattering immediately,” Keblaoui, a Lebanese journalist who was finishing up his vacation in the city.

“Very shortly after, I could see how many injured were on the ground,” Keblaoui told reporters. He describes seeing dead bodies and severely injured victims during the incident.

“There was a man in the store bleeding from his ears and his legs, and his friends were crying near him,” recalled Keblaoui.

Istiklal Street was packed with visitors when the blast occurred on Sunday afternoon.

“It went very quickly from a very peaceful Sunday with a very crowded street full of tourists to being what looked like the aftermath of a war zone,” Keblaoui said.

Turkish President Recep Tayyip Erdogan said earlier Sunday that the explosion might have been a terrorist attack, but he could not confirm it.

“It may be wrong if we say this is definitely terror, but according to preliminary findings, what my governors told us, that there is a smell of terror here,” he told reporters.

He said authorities are reviewing the CCTV footage.

“All the responsible figures will be identified and punished,” promised the president.

Erdogan announced that he would continue to attend the G20 summit during a press conference in Jakarta.

Anadolu news agency reported that the Istanbul Chief Public Prosecutor’s Office has launched an investigation. According to the vice president, at least eight prosecutors have been assigned.

As reported by Anadolu, the city’s criminal court has banned all visual and audio coverage of the explosion, as well as social media postings.

A flood of condolences poured in after the explosion was reported around the world.

Following a deadly terror attack in his own country seven years earlier, Macron expressed his sympathies with the Turkish people.

“On this day so symbolic for our Nation, while we think of the victims who fell on November 13, 2015, the Turkish people are struck by an attack in their heart, Istanbul,” Macron tweeted on Sunday. “To the Turks: we share your pain. We stand with you in the fight against terrorism.”

“Horrific news from Istanbul tonight,” he reported. “All our thoughts are with those currently responding and the people of Türkiye at this very distressing time.”

NATO Secretary General Jens Stoltenberg tweeted his “deepest condolences” to the Turkish people, adding that NATO stands in solidarity with its ally.

Karine Jean-Pierre, White House Press Secretary, strongly condemned today’s violence in Istanbul in a statement issued Sunday. “Our thoughts are with those who were injured and our deepest condolences go to those who lost loved ones.”

Ukrainian President Volodymyr Zelensky expressed “deep sadness” over the blast in a tweet. “I offer my condolences to the families of those who lost their lives and wish a speedy recovery to the injured,” President Zlensky said. “The pain of the friendly Turkish people is our pain.”