SUV crashes through Apple Store, killing 1 and injuring at least 19 others 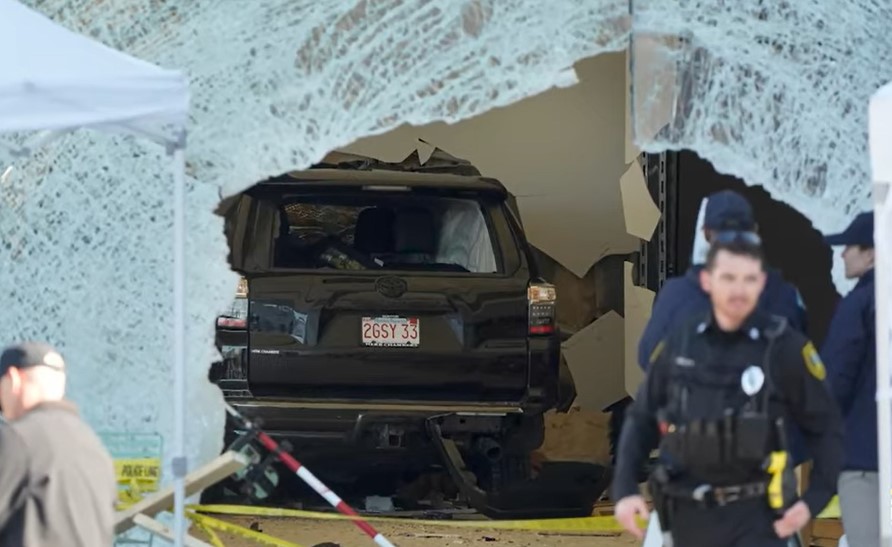 A car crashed through an Apple store in Hingham, Massachusetts, killing one person and injuring 19 others, the Plymouth County District Attorney’s Office said.

According to the district attorney’s office, Kevin Bradley, 65, of New Jersey, died at the scene. The DA’s office declined to identify the driver at this time.

“A dark-colored SUV appears, went through at a rate of speed undetermined, through a … glass window and struck multiple people,” Cruz said.

Upon arriving, units found “multiple patients injured out in front of the store and in the store, including a few patients that were pinned against the wall by the vehicle,” Fire Chief Steve Murhpy said at the news conference.

Seven fire engines and 14 ambulances were on the scene to treat the injured victims, Murphy said. The chief was unable to provide an update on the conditions of the victims. The names of the injured victims are not being released at this time since family members are being notified, Cruz said.

The DA’s office told reporters in an email that 17 patients were being treated at South Shore Hospital in Weymouth, Massachusetts, as of Monday evening. Initially taken to South Shore, two other injured people were transferred to Boston hospitals.

According to Dr. William Tollefsen, a physician at South Shore who helped triage patients after the crash, many of those injured suffered head trauma and mangled limbs.

In order to keep people out of the cold, Tollefsen and other first responders used a nearby restaurant for triage.

Several patients with life-threatening and limb-threatening injuries are being treated at South Shore, according to trauma chief Dr. Christopher Burns. Burns said Monday afternoon that some had already had surgery and others were still waiting.

The number of patients transferred to Brigham and Women’s and Boston Medical Center is not clear.

According to Cruz, the investigation into the car crash is “active” and ongoing.

“My understanding is he’s not been taken to the hospital as of yet,” Cruz told reporters. “He is, right now, with police officers.”

Cruz pointed out that the beginning of a holiday week would make it difficult to determine how many people may have been inside the Apple store at the time of the accident.

“Obviously the Apple store is a very busy place. It’s Monday of a holiday week,” Cruz noted. “So therefore I don’t know exactly how many people were in there – I’m sure that we will find out.”

The distance from Boston to Hingham is about 20 miles.

According to Apple’s website, its Derby Street location in Hingham is currently closed.

“We’re sorry for the inconvenience while this store is closed,” the website stated. “Until we can reopen again, please consider using our online services.”

In a statement released Monday, Apple said “our hearts go out to our team members and customers who were injured and all of those who were affected by this terrible incident.”

“We are devastated by the shocking events at Apple Derby Street today and the tragic loss of a professional who was onsite supporting recent construction at the store,” the company stated. “We are doing everything we can to support our team members and customers at this very difficult time.”

Located in the back corner of the upscale Derby Street Shops, the Apple store boasts a large glass storefront. There is a large parking lot right outside the store’s entrance, through which hundreds of visitors drive each day.

At this time of year, the Apple store and the nearby restaurants and shops draw large crowds, especially during the holiday season.