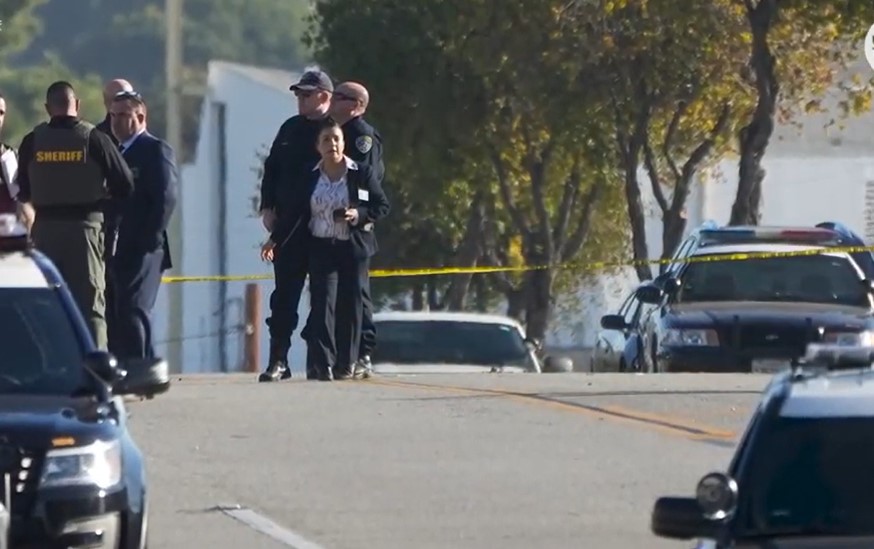 During a news conference in Orange County, where many of the injured were transported, Sheriff Alex Villanueva said 25 recruits were injured. The students were members of Academy Class 464. A number of the injured patients had head trauma and broken bones, and “some had lost limbs,” noting that one was on a ventilator.

Sources familiar with the incident said at least one recruit suffered cranial bleeding and was in critical condition.

“It looked like an airplane wreck,” Villanueva explained. “There was so many bodies scattered everywhere in different states of injury that it was pretty traumatic for all individuals involved.”

All of the recruits’ injuries are “survivable,” the sheriff said, but he has never seen an incident involving so many recruits before.

“Our hearts are with the Los Angeles County sheriff’s recruits injured this morning while training to serve their communities,” Governor Gavin Newsom said in a statement. “Jennifer and I send our best wishes for their recovery and stand with their loved ones and colleagues at the Los Angeles County Sheriff’s Department during this difficult time.”

According to Los Angeles County Fire Capt. Sheila Kelliher, the group was running along Mills Road when they were struck.

The recruits were running in four columns when a vehicle approached at 30 to 40 mph, Villanueva said. Before the SUV struck others and crashed into a light pole, those at the front of the column were able to get out of the way.

Capt. Art Jimenez said two recruits from the Bell Police Department were injured. He said one of them was being taken back to the academy for formal interview after being released from a hospital.

Two classes of law enforcement cadets are currently based at the STARS Academy, which is a 22-week training program. They receive extensive training in firearms, law, police procedures, self-defense, law enforcement driving, physical fitness, and force de-escalation. According to Villanueva, Academy Class 464, which included recruits from Glendale and Pasadena police departments, entered its eighth week this week.

Cadets detained the 22-year-old driver at the scene, authorities said. Kelliher said the vehicle was going the wrong way.

A crash investigation has been taken over by the California Highway Patrol. A forensic and technical examination of the scene is being conducted by the agency’s multidisciplinary accident investigation team.

“It does seem like this car did not slow down,” supervisor Janice Hahn said. “It made me just sick when I heard [about] it.” Kathryn Barger described the accident as “senseless and tragic.”

Captain Pat McDonald of the Los Angeles County Sheriff’s Department’s training bureau, which oversees the Sheriff’s Academy, said more recruits would have been injured if there hadn’t been the light pole.

On Wednesday afternoon, Olga D’Ambrosio, of Santa Clarita, laid several bouquets of flowers outside the STARS academy parking lot. During the crash, her 22-year-old son, Alex, was running among the deputy recruits. Her voice broke as she explained that D’Ambrosio was not injured and treated his classmates with first aid.

“He called me and said, ‘Mom, something happened. I’m OK,’ ” D’Ambrosio said.

Usually, he runs outside the formation, but on Wednesday, he ran closer to the center. She isn’t sure how that factored into the crash, but she can’t help but think he might have been hurt if he was somewhere else.

Pastor Trujillo met with the families of cadets taken to Lynwood’s St. Francis Medical Center in critical condition and prayed with them.

In a waiting room outside the intensive care unit, Trujillo and a Roman Catholic priest spoke with about 30 family members.

“Shortly after the crash, the mood was one of sadness and fear because no one knew what happened or what was next,” Pastor Trujillo explained. “As the day went on, the mood improved a little and you could see some hope from families.”

According to law enforcement sources, the driver, who has not been identified and was transported to a hospital, said he was sleepy. He did not smell of alcohol at the time of the crash, but authorities are investigating whether he had been using other controlled substances. In a Breathalyzer test administered at the scene, Villanueva said he blew a 0.0.

The driver is from Diamond Bar, but authorities have not released any additional information about him.

Investigators are investigating his background and have discovered that his uncle is a law enforcement officer. He may have been under the influence based on his initial behavior, they say. In addition, marijuana was found in his vehicle, they said.

Near the damaged SUV, deputies were grouped on Mills Avenue.

Anthony Mendoza, 75, stood outside his home as yellow crime scene tape blocked Trumball Street and Mills Avenue. He has lived there for 25 years and has seen cadets run past.

On Wednesday morning, he heard sirens around 6:30 a.m., but did not leave his home to investigate. Authorities knocked on his door and informed his wife that there had been an accident.

“I don’t understand how this happened,” he said, gesturing at the wreckage.

There is a 92-year-old man living next door to Mendoza named Raymond Espinosa. He didn’t hear the sirens; he only heard the helicopter overhead. After watching the news, he learned about the crash.

Espinosa, who has lived in the area for more than 50 years, has also seen recruits running around.

“You see them all come by here,” he said, adding that the neighborhood is usually quite, so a crash like this is unusual. “It’s horrible.”

Residents from all over the city arrived at the intersection throughout the morning.

“Can you imagine the parents? They probably don’t even know yet that their kid got hit,” Jessica Martinez told her friend, Yvonne Salas, as they stared down the street.

Their home is in Whittier, and they had driven to the scene. Her neighbor texted to ask if she had seen the news.

“It’s so sad,” Martinez said, who has a 3-year-old daughter.