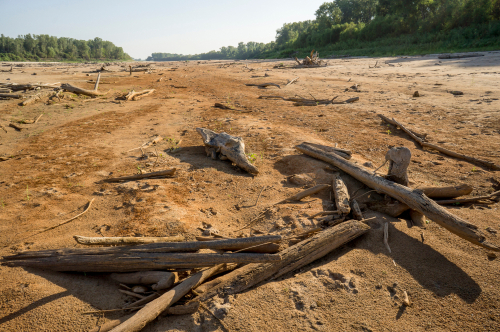 In the aftermath of a severe drought, the Mississippi River is at its lowest level for decades, and that is impacting everything from shipping to drinking water along the nation’s second-longest river.

The Mississippi River levels are at their lowest level in almost 70 years, according to George Flaggs.

It is really having an impact on the local economy as a result of the fact that commercial use of this river has almost totally stopped, according to Flaggs, the mayor of Vicksburg, Mississippi, who spoke to reporters.

The mighty river looks more like a creek at Tiptonville, Tennessee, approximately 90 miles north of Memphis.

However, the impacts will not be felt only by those who live and work along the 2,350-mile-long river.

The Mississippi River Basin produces 92% of U.S. agricultural exports and 78% of world feed grains and soybean exports, according to the National Park Service. The majority of such products are shipped by barges, as are other products such as fertilizer, coal, oil and petroleum, as well as metals.

In recent weeks, barges have run aground due to the low level of the river. Last week, more than 2,250 barges sat idle near Vicksburg as dredging was being performed to make the river deeper.

As a result, shippers have turned to more costly rail and truck transport, which can cost five times as much as shipping by barge.

It has been reported that increasing shipping costs for grains and fertilizers could lead to higher food prices in your local grocery store – while farmers are losing money because their harvest is piling up.

An increase in steel prices could increase the cost of a new car. The cost of electricity may increase if coal is delivered late to a power plant. A gallon of gasoline could even increase in price as more tractor-trailers take to the highways, resulting in an increase in demand.

A 15-barge tow is equivalent to 940 semi trucks, according to Mike Steenhoek, executive director of the Soy Transportation Coalition.

It is possible that the effects will linger. There is a delay in moving fertilizer that should be moving north along the river in preparation for its application in November.

The greatest challenge is planning for next year, according to Hunter Biram, extension economist with the University of Arkansas System Division of Agriculture. The cost of fertilizer is already high, and it is not yet clear how much higher it could rise.

In addition, the Mississippi River supplies water to more than 50 communities, according to the Environmental Protection Agency.

One of those communities has been affected by the low levels of the river.

As a result of the lower, slower flow of the river, salt water from the Gulf of Mexico is able to move upstream into the river channel, according to David Ramirez, chief of the River Engineering Branch of the U.S. Army Corps of Engineers.

Located on the tip of Louisiana, Plaquemines Parish has warned residents that a “saltwater wedge” moving up the Mississippi River is causing an increase in sodium and chloride levels.

It has been advised that sodium and chloride could pose a problem for people who are on dialysis or low-sodium diets because of medical conditions such as high blood pressure or kidney disease.

It is not just a health issue.

“The salt water can cause corrosion to pipes and may alter the taste of municipal water, so we are involved in order to mitigate this,” Ramirez told Fox 8 News.

It has been announced that two reverse osmosis machines have been acquired by Plaquemines Parish President Kirk Lepine.

It is expected that these plants will remove the chloride from the water and still produce approximately 1 million gallons of water for daily use,” Lepine stated.

According to Ramirez, the Engineers Corps will construct an underwater levee at the bottom of the river to prevent saltwater intrusion. Sediment dredged from the river will be used to construct the structure that will be approximately 50 feet in height. It may take about three weeks to complete the construction.

As reported by the U.S. Drought Monitor, a significant part of the Mississippi River Basin has been experiencing abnormally dry temperatures and severe conditions due to drought.

Several sections of the river may reach record low levels later this month, including Caruthersville, Missouri; Osceola, Arkansas; and Greenville, Mississippi. In Memphis, the river may bottom out at levels not seen since the drought of 1988.

It has been reported that September of this year has been among the driest in Arkansas, Louisiana, Missouri, and Oklahoma on record.

There was some welcome rain in the Lower Mississippi Valley on Wednesday, and more is expected this weekend. After that, however, drier weather is expected for at least the next week.

This indicates that the situation is not likely to improve much as shippers rush to complete shipments before the northern stretches of the river freeze over.

It is imperative that something is unloaded in the northern regions – Iowa, Wisconsin, Minnesota – and then returned before the drawbridge closes behind you due to cold weather and ice accumulation, stated Steenhoek, of the Soy Transportation Coalition to Bloomberg. “That is even more difficult when the river is not functioning as efficiently as usual.”