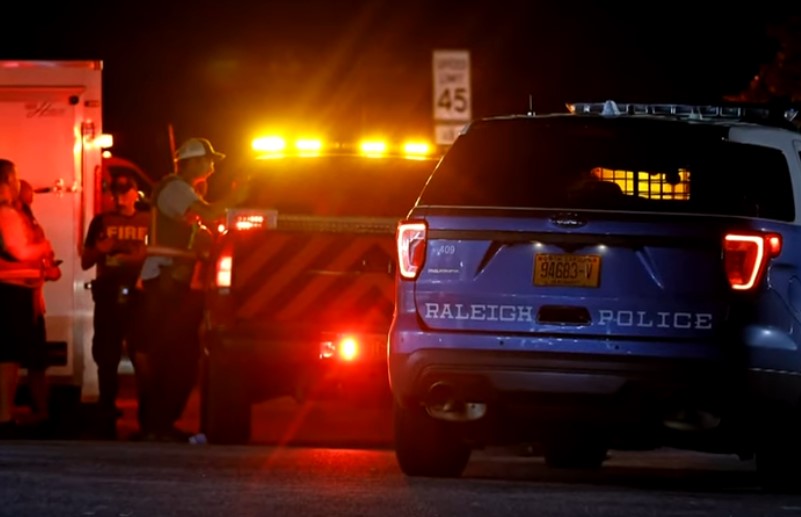 There are five people dead, including an off-duty police officer, as a result of a shooting that occurred Thursday in eastern Raleigh, North Carolina, police said.

It was reported that two people were taken to a hospital, one of whom was a Raleigh K9 officer, who was treated for non-life-threatening injuries and later released from the hospital. Lt. Jason Borneo, a Raleigh police spokesperson who represented the department during a press conference held Thursday night, said that the other victim is in critical condition.

“Tonight, terror has reached our doorstep. As Gov. Roy Cooper said at the end of the news conference, “The nightmare of every community in the country has come to Raleigh.” He said, “There is no logic or reason to this senseless, horrific, and infuriating act of violence that was committed.”

A suspect was taken into custody shortly after 9:30 p.m., Borneo confirmed, and the investigation is ongoing. Police have described the suspect as a White male juvenile, but no further information has been provided about him.

The shooting occurred around 5 p.m. in the neighborhood of Hedingham near the Neuse River Greenway, according to Borneo. There followed an hours-long ordeal during which the authorities worked to apprehend the suspect.

According to helicopter footage provided by WRAL-TV, more than a dozen emergency vehicles were lined up along a road through a wooded area of the city.

In addition, a woman who was at the Hedingham Golf Club driving range said that there was an “unending stream of police” driving by the area while she was there.

She told reporters that “a golf professional came out to tell us to shelter inside or leave as soon as possible. They were very calm, but I could tell something was wrong, so we left right away.”

It has been reported that around 8:30 p.m., the police advised residents to remain inside their homes until further notice.

In addition to Raleigh police, a number of local and state law enforcement agencies are assisting in the investigation, including the Charlotte Bureau of Alcohol, Tobacco, Firearms, and Explosives (ATF).

A visibly emotional Baldwin told reporters that she hoped that no other mayor would ever need to face a similar situation in the future.

“We have to end this mindless gun violence that is happening in our country,” she said.

Since the beginning of this year, there have been at least 531 mass shootings in the United States – including Thursday’s shooting in Raleigh – according to data from the Gun Violence Archive. In the organization’s definition, a mass shooting occurs when at least four people are killed, excluding the shooter.