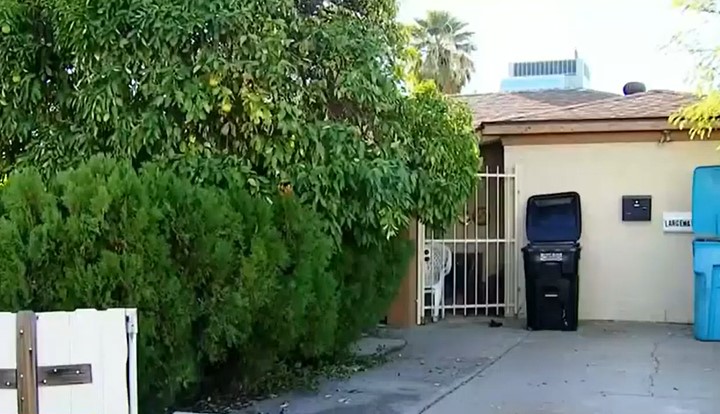 An Arizona man whose body had been missing for about a month was found chopped up in his home, and police said they caught the killer. The unidentified man’s roommate, Thomas Wallace, now faces multiple felonies related to his death.

After he hadn’t spoken to his family for a few weeks, police checked on him at his home near 30th and Campbell avenues, north of Indian School. His neighbors reported seeing homeless people often at his home in the past. Two weeks passed without any word from the man. With the help of firefighters, police forced their way into his house. There was a bad smell, according to the officers. As a result, investigators searched the house and found two black trash bags inside the bedroom containing different parts of the victim.

On the next day, homicide investigators arrived and found blood on the ceiling, the walls, and the furniture in the living room. It appeared somebody had attempted to clean the blood off the floor. Upon searching a pile of linens, detectives found a human head attached to a man’s upper body that was cut off. The head belonged to the victim.

Investigators discovered the man’s car had gone missing and located it at a motel nearby. That’s where they found Wallace, along with Romana Gonzalez, who lived with the victim intermittently. They were both taken into custody on Thursday. Wallace requested a lawyer, but Gonzalez spoke with the police instead. In recent months, she hasn’t been staying with the victim because of Wallace’s behavior. Gonzalez said she went to the man’s home on Sept. 30 with a friend and saw blood on the floor of his living room. However, it is unclear when Wallace killed the man, according to court records. Later, they discovered the body inside the house.

Wallace and Gonzalez pawned some of the man’s items last week, according to police. There was also a camera bag with a camera and a 10-inch chainsaw hedger with a pole attachment. They received a payment of $50. In court documents, detectives learned that the bag contained a portfolio containing the victim’s business card. Police reported that when they confiscated and processed the chainsaw, they smelled decomposition and found pieces of flesh and torn ligaments on the blade.

Local residents were stunned to hear that something so violent had occurred in their neighborhood. Ruby Lowry has known the victim since they moved onto the same street in the 1970s. “He was a very good neighbor he would help anybody. It’s a sad thing to happen to him. He didn’t deserve that,” she said.

The man was an Air Force veteran in his eighties, according to Lowry. He was the handyman of the neighborhood, according to her. Lowry observed that people were coming and going from the home on a regular basis but never imagined that any of those individuals would be accused of murder. “I hope they get what they deserve because he would help anybody. That’s probably why he had them over there,” she said.

The charges against Wallace include one count of first-degree murder, one count of theft of a means of transportation, two counts of trafficking stolen property, and one count of concealing a dead body. Gonzalez was arrested and charged with fraud and theft.