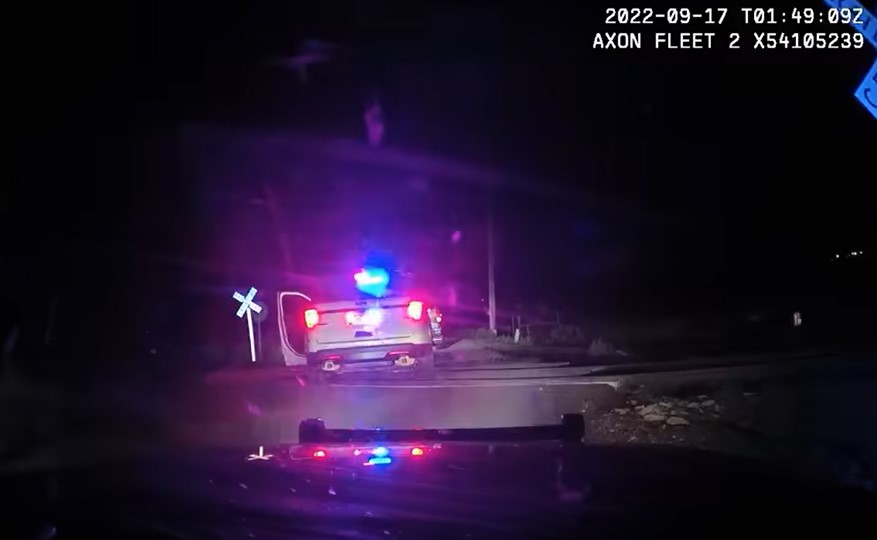 Video released by Colorado police on Friday shows a high-speed locomotive plowing into a parked police car with a handcuffed suspect in the back, forcing at least one officer to run for his life.

In the evening of Sept. 16, Yareni Rios-Gonzalez, 20, was locked in the cruiser that was parked on tracks north of Platteville, Colorado. Personal injury lawyer Paul Wilkinson said she saw and heard the freight train approaching and tried to get the officers’ attention. Wilkinson said Rios-Gonzalez tried to escape the car, but the doors were locked.

“She saw the whole thing coming and believed it was the end,” he said.

Newly released body camera footage shows officers handcuffing and putting Rios-Gonzalez in the backseat before searching her truck, which was parked just ahead of the train tracks. The horn of a northbound train can be heard moments before it collides with the cop car’s passenger side.

A police officer shouted, “Stay back!” just before the impact, possibly to fellow officers. In the video, you can see the officer quickly reversing from the parked cruiser before it was struck.

This 8-minute video, which was compiled from multiple angles and edited and redacted by the Fort Lupton Police Department, was obtained by 9News, and Wilkinson confirmed its authenticity. Rios-Gonzalez was detained in the car for about two minutes before the accident on the train tracks, according to the report.

An officer doesn’t immediately realize Rios-Gonzalez is in the police car when it is hit in another clip published by 9News. “Was she in there?” he asked a male officer seconds after the impact.

The female officer responded “Oh my god, yes she was,” as she ran toward the cruiser that had been destroyed.

Police responded to a report of someone “menacing with a handgun” on the highway, according to the Fort Lupton Police Department. Rios-Gonzalez was pulled over by a Platteville police officer, and Fort Lupton officers assisted in detaining her and searching her vehicle. A search of the truck continues after Rios-Gonzalez was taken to the hospital in an ambulance following the crash, as shown in the footage.

Wilkinson told reporters that Rios-Gonzalez had not been charged with anything related to her detention as of Friday afternoon.

Among her injuries were a head injury, a broken arm, a fractured sternum, nine broken ribs, a broken tooth, as well as strains to her back and legs, Wilkinson said. Despite her injuries, she is conscious, able to speak, and has stood briefly. Wilkinson said she will take time to recover. However, medical staff is hopeful that she will be able to leave the hospital sometime next week once she is more mobile.

He said he will pursue legal action against the Platteville Police Department and the three officers who were present individually on behalf of Rios-Gonzalez. The officers’ conduct could be considered reckless endangerment, a higher standard of negligence, or gross negligence in Colorado.

As Wilkinson noted, “parking on train tracks is something no one should ever do,” adding that after police took Rios-Gonzalez into custody, her safety was in the police’s hands.

A Platteville police chief told reporters via email earlier this week that the officer involved in the incident has been placed on administrative leave pending the investigation. An inquiry from USA TODAY was not immediately answered by the Fort Lupton Police Department. According to the Colorado Bureau of Investigation, Rios-Gonzalez’s injuries are being investigated, while the Colorado State Patrol investigates the crash, and the Fort Lupton Police Department investigates the arrest and alleged road rage incident.

“For more coverage on this story, check the following additional news sources: