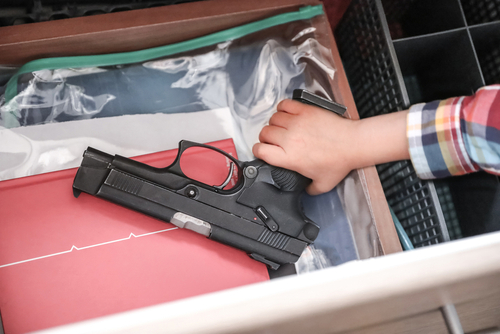 A 3-year-old Florida boy died after he accidentally shot himself with a handgun that he found in an unlocked crate, police said. The shooting happened Wednesday shortly before 6 p.m. at a residence in the Lamplighter Mobile Home Community of Gainesville.

A preliminary investigation found the child, who has not been identified, was playing with the gun when it went off and struck him. The child died in a hospital.

Two other juveniles witnessed the shooting, Gainesville police said in a Facebook statement. John Pandak told local TV station WGFL there was an adult in the house as well, but he was not a childs parent. The childs parents were not at the house when the shooting occurred.

Pandak said that he got hold of the gun, which obviously, means it was at an area where that shouldn’t have been. “However, how it got there, and why it was there, is still being determined.

Firearms were the leading cause of death among American children and teens for the first time in 2020, the latest year with data. While studies from 2016 found motor vehicle crash outpaced firearm deaths among children, the roughly 30% increase in the latter from 2019 to 2020 made guns the leading cause of death, according to a New England Journal of Medicine analysis of CDC data published in late April.

The CDC reported 4,368 deaths by gun violence among children in 2020, with the vast majority being homicides, followed by suicides. Unintentional deaths caused by guns and deaths for which there was no known cause account for very small portions of the data.

The CDC data defines children and teens as any person age 19 and younger.

The Centers for Disease Control and Prevention (CDC) has come under fire from everyone, with its confusing set of messages leaving Americans confused in the wake of record numbers of COVID-19 cases and the spread of an Omicron variant.

The biggest driver of the rise of firearm deaths, though, has been a steep decline in deaths by automobiles over the past few years. Motor vehicle crashes in 1999 resulted in 10 deaths for every 100,000 children and teens, nearly double the rate of gun deaths in 2020. Motor vehicle deaths have fallen steadily since 2000, amounting to slightly more than 5 deaths per 100,000 children and teens in 2020.