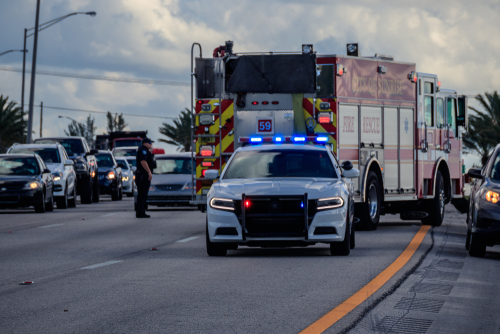 Boy, 17, charged with murder after allegedly fleeing police in stolen car and slamming into another car, killing a woman on her way to work – Chicago Sun-Times

A 17-year-old boy was accused of murdering a woman after fleeing police in a stolen car, reaching speeds of 90 mph before crashing into her.

Police arrested Juan Vazquez after a brief foot chase on South Kedzie Avenue after he fled the car after the collision early Thursday.

He still had the keys to the black Honda that had been stolen about six hours earlier. In a police report, a 65-year-old woman reported that she had been retrieving a cellphone from her Honda when it was stolen.

Vazquez was charged with first-degree murder and aggravated fleeing from police. Judge Maryam Ahmad denied Vazquez bond during a hearing Friday, saying the speed of his vehicle left her speechless.

“It’s a miracle anyone, including him, wasn’t killed,” Ahmad said. According to police, the Honda’s Vazquez and its three occupants only sustained minor injuries.

Officials declined to provide details about the chase that led to the accident. According to a police report, officers attempted to stop the stolen Honda, but it sped off, causing a “vehicle chase lasting approximately 11 miles” in which Vazquez blew a red light and struck Dominga Flores, 55, in her car.

Sadly, Flores passed away at Mount Sinai Medical Center. Vazquez and three other people in the Honda were treated at Stroger Hospital and taken into custody by police. Two guns were recovered from the Honda, according to the police.

Two of the Honda passengers – 15 and 17 – face charges of aggravated unlawful use of a weapon. As for the third passenger, Enrique Angeles, 22, he was charged with criminal trespass in a vehicle.

Although the officers arrived in time to chase down Vazquez and take him into custody, it is unclear if they broke off the chase before the fatal crash. A request for comment from the Civilian Office of Police Accountability was not immediately returned.

Identifying himself as Juan Vazquez’s father, but not providing his name, he said: “It was an accident, that’s all” and declined additional comment. During his son’s hearing, the father blamed police for chasing the Honda.

Honda’s theft occurred around 6:55 p.m. on Wednesday in the 3400 block of South Claremont Avenue, about two miles away.

According to police, the owner of the car stepped outside to retrieve a cellphone when an unknown person got out of the stolen white pickup truck and demanded her keys.

According to an arrest report, the robber told the victim he would kill her if she did not give the keys. As soon as he grabbed her keys, he sped away along with the stolen truck.

The truck was later set on fire on South Leavitt Street, according to police. Upon spotting the Honda, responding officers chased it, according to the police report. It lasted for nine minutes, during which the Honda ran through red lights at speeds of 90 mph.

At Friday’s hearing, the assistant public defender representing Vazquez said there was no evidence his client had stolen the Honda hours earlier. According to him, Vazquez is a student at an alternative high school and enrolled in mentoring and employment programs.

The judge, however, noted that Vazquez already faced an unlawful use of a weapon charge before the crash. In denying bail, she stated that he was already on the court’s bond.

Sheriff’s deputies tried to get Vazquez’s supporters to exit the building after the hearing because they made angry comments about the judge’s decision.

Through an interpreter, two of Flores’ relatives told deputies that they walked and took public transportation to the hearing. In an effort to “safely get home,” a deputy coordinated a ride for them out of concern for their safety.

Flores was heading north on Kedzie Avenue, on her way to work, when the Honda struck her car. In her daughter’s words, Flores was about a block away from work.

It was imperative for her mother to work nights so she could see her children in the morning, her daughter recalls. “She was a wonderful mother,” said her daughter, who did not want to be identified. “It’s unfair. We loved her very much.”

Friends of the family, who did not wish to be named, said Flores was hardworking and humble. Wasn’t interested in causing problems with anyone.”

Boy, 17, charged with murder after allegedly fleeing police in stolen car and slamming into another car, killing a woman on her way to work  Chicago Sun-Times