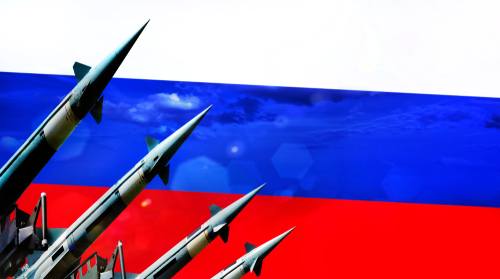 Days after warning of the “increasing” threat of nuclear war, Russian President Vladimir Putin floated the possibility of changing its military doctrine to not use nuclear weapons first.

“They (the US) have it in their strategy, in the documents it is spelled out — a preventive blow. We don’t. We, on the other hand, have formulated a retaliatory strike in our strategy,” Putin said at a news conference in Bishkek, Kyrgyzstan.

Putin said that, even if Russia retaliated immediately upon seeing nuclear missiles launched towards it, “this means that the fall of the warheads of enemy missiles on the territory of the Russian Federation is inevitable — they will still fall.”

According to Putin, the United States’ policy is not to rule out the possibility of “disarming” nuclear attacks, whereas Russian doctrine uses nuclear weapons only as a last resort.

“So if we’re talking about this disarming strike, then maybe think about adopting the best practices of our American partners and their ideas for ensuring their security. We’re just thinking about it. No one was shy when they talked about it out loud in previous times and years,” he explained.

“If a potential adversary believes it is possible to use the theory of a preventive strike, and we do not, then this still makes us think about those threats that are posed to us,” he went on.

According to Biden administration officials, Moscow has been warned at the highest levels of the consequences of using nuclear weapons.

As he warned of the “increasing” threat of nuclear war, Putin did not promise that Russia would never resort to nuclear weapons first.

“As for the idea that Russia wouldn’t use such weapons first under any circumstances, then it means we wouldn’t be able to be the second to use them either — because the possibility to do so in case of an attack on our territory would be very limited,” Putin said.

Putin’s comments come as the war enters winter, with Russia continuing to shell eastern and southern Ukraine – and facing attacks on its own soil.

Russia launched a fresh wave of drone and missile attacks against Ukraine’s energy infrastructure on Monday. Several regions, including Kyiv and Odesa, were affected by the strikes, according to Ukrainian President Volodymyr Zelensky.

Officials from Russia said this week that it had been the target of several drone attacks targeting military infrastructure.

In a statement, the Russian Defense Ministry blamed the explosions on Ukraine, which has yet to comment publicly.