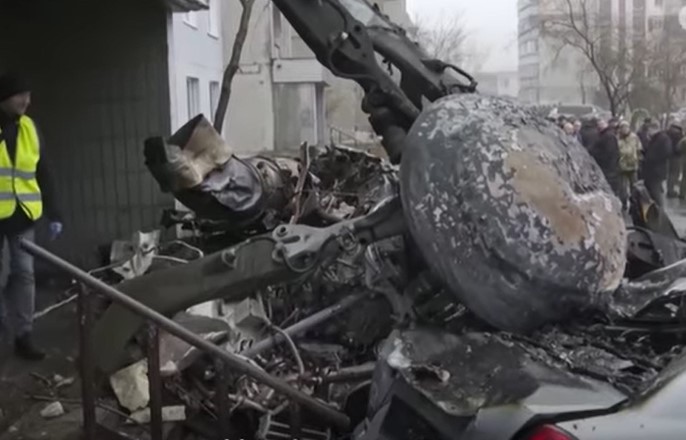 Denys Monastyrsky, the Ukrainian Interior Minister, and a child were among the 14 victims killed in a helicopter crash in Brovary, an eastern suburb of Kiev, after the helicopter slammed into a kindergarten and its playground.

Initially, officials stated that the death toll was even higher, but Ukraine’s State Emergency Service later announced that 14 people had died, including one child, and 25 people had been injured, including 11 children. Authorities provided the update after identifying bodies and concluding search and rescue operations.

“It is an indescribable pain,” said Ukrainian President Volodymyr Zelenskyy while extending his condolences to the families and friends of those who lost their lives.

The helicopter’s nine occupants, including its crew of three, were all killed in the incident.

It is not yet known what caused the crash. Early Wednesday morning, there was heavy fog in the area. Ukraine is also at war with Russia, which has fired missiles at civilian areas throughout the country, including an apartment building in the city of Dnipro in the southeastern part of the country.

There are many apartment buildings, a shopping center, and colorful playgrounds in the neighborhood where the helicopter went down.

The crash sent a door-sized panel of the helicopter and other parts of the aircraft flying across the kindergarten’s playground. In that area and an adjacent area, blankets were used to cover bodies lying on the ground, while charred wreckage lay nearby.

As emergency crews continued to clear debris from the scene, local residents gathered flowers and small knitted stuffed animals to create a memorial to those who lost their lives.

Nina Letun, 63, watched workers clear the site alongside her two grandchildren, Vova, 5, and Viktoria, 6. Vova is a student at the school.

“We came just to see what happened – and to realize that he won’t go to this kindergarten anymore,” Letun explained.

This morning, Vova, who was wearing a puffy blue jacket and a knit hat with a pompom, was not at school.

“He was sick yesterday, that’s why today he stayed with me,” said Letun. “If he wasn’t sick, he would have been there.”

Her granddaughter screamed when they first heard the crash – at the start of the war, her family lived in an area occupied by the Russians.

Letun wept as she considered the children who died at the school. In the aftermath of the explosion, she stated, “I saw a fire, the fire was bigger than that 12-story building” — referring to an apartment complex located behind the school.

One mother, Inga Litchenko, pushed her 2-and-a-half-year-old daughter, Elyzaveta, in a stroller. It was her intention to send Elyzaveta to this particular school.

“It’s very frightening, you can see that the helicopter crashed into the kindergarten,” commented Litchenko. “I want to emphasize that it was very foggy and I don’t know why they decided to take the helicopter in such weather.”

A Ukrainian security service announced on Wednesday that it would investigate three possible explanations for the crash: that the aircraft malfunctioned; that it flew despite poor visibility; and that it was deliberately targeted.

According to the Ukrainian government, the entire leadership of the interior ministry, including the first deputy, Yevhen Yenin, as well as State Secretary Yuri Lubkovych and other staff members, has died.

In the hours following the disaster, the Ukrainian government appointed Ihor Klymenko, chief of the Ukrainian National Police, as acting minister of internal affairs.

According to an official from the president’s office, Monastyrsky’s group planned to visit one of the country’s hot spots. The interior ministry of Ukraine is responsible for law enforcement, the police force, the national guard, and the emergency services of the state.