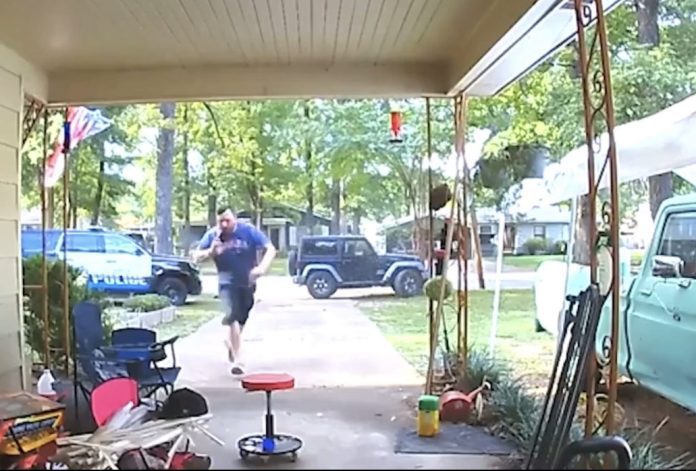 A disturbing video shows part of an encounter between an off duty police officer and a local man that showed up at his home in Decatur, Alabama. This happened last Tuesday, August 16. The man has been identified as fifty-four-year-old Decatur resident Gregory Martin Hill. It all started when the police officer was at his residence, and Hill approached in a car.

According to the Decatur Police, as the off-duty officer approached Hill’s vehicle, Hill began to speed away, during this process he struck another vehicle and a mailbox. After that he turned around and headed straight toward the officer. Police are describing it as “an apparent attempt to run him over”, he was not successful and instead hit a tree, but that did not deter him.

After the officer was hit by the car, backup arrived at the scene, and Hill was arrested. The officer was taken to Huntsville Hospital and was treated, and has since been released. Police say he is doing well and walking, and he appreciates all the support and prayers he and his family have received.

According to a police statement, Hill was first charged with second-degree assault, but those charges have since moved to attempted murder. Hill is booked into the Morgan County Jail and will remain there in lieu of bond.

The investigation is still ongoing as additional charges are pending. No information on the motive was released.